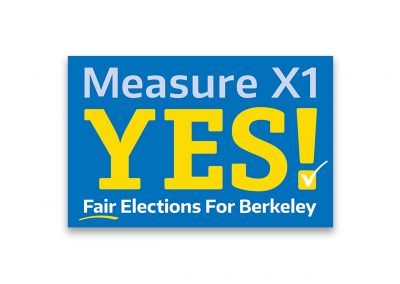 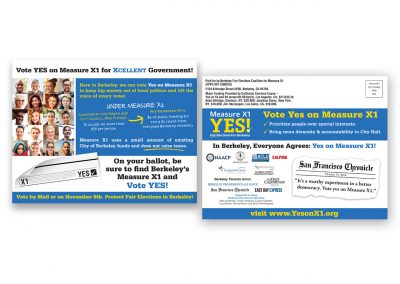 Quite often the challenge in political design is to take an initiative or issue that is incredibly complex and difficult to understand and make it something the average voter can relate to and make sense of. Yes on Measure X1, the City of Berkeley’s Fair Elections Act, was a good example.

Working closely with the political consultant tasked with creating the messaging for this campaign, the goal was to take a very intricate and convoluted ballot measure about campaign financing and distill it down to a few key points that were easy for the voter to interpret.

We started first with creating a simple logo for the campaign that said it all – the name of the initiative, the fact that it was about fair elections, and that big yellow YES! as a call to action for Berkeley residents.

Next came the two mail pieces that needed to explain visually what the measure was about, why the audience should vote to pass it, and assure them that if they did so it did not mean a raise in taxes. We even went so far as to recreate on one of the mail pieces what the measure would look like on the actual ballot the voters would be using, so that when it came time to vote they would recognize it.

The end result was a campaign brand that was clear and memorable. Best of all, it worked, and the measure passed!